These were the Infantry class of the early Roman Army (after their Hoplite phase). They were originally Spearmen (and later Swordmen). The Hastati were the primary Army after Rome's rebellion and independence from Etruscan rule. Originally "lower class" (poor), they only received their sword and shield from the Roman Government. Mostly they could only afford (and paid for with their own funds), light Chain Mail armor and other simple necessities of camp life. The Hastati were also equipped with the Pilum (as technology progressed). They were at first considered "expendable" front line troops, designed to absorb the initial enemy attacks. This tactic was used to soften up the enemy for the better equipped "2nd Line" soldiers. They were often deployed in a Quincinx Formation (or five-pointed square). By the beginning of The Marian Reforms of 107 B.C. - the use of this version of Hastati was discontinued. 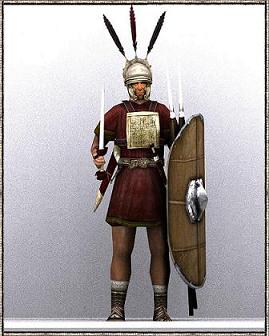