The term “Harquebusier” had different meanings to different Countries in 16th and early 17th Century Europe. Broadly defined, they were akin to Mounted Infantry. Cavalry tactics were being to change from the massed Medieval Armored Knights on horseback. Still not true Cavalrymen, Harquebusiers carried the Matchlock Musket and often a sword or saber. Some also carried crude pistols (although even this was rare). Often, Demi-Armor was worn as well (but this was rapidly declining in favor of speed and mobility). Each Mounted version of The Harquebuiser carried a crossbelt of pre-measured power casks – which could be quickly gotten to in battle. In as much as The English Civil War, both Parliamentarian and Loyalist Forces deployed Harquebusiers with varying success. Capable of deploying quickly “to foot”, they were the first attempt of the much later envisioned Dragoons. 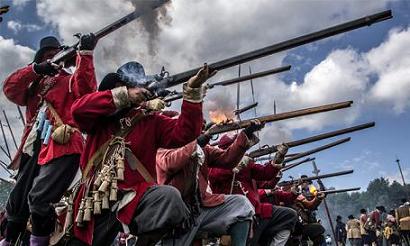