Located in Harlech, Gwynedd, Wales - Harlech Castle was built on a 200 foot cliff rock outgrowth between 1282 and 1289. Commissioned by King Edward I (during his war and invasion of Wales). Serving as a major base of operations during his campaigns, it was besieged by Welsh forces (but held) in 1294-95. Garrisoned by the English, it was besieged again by the Welsh in 1404 - this time falling under their control. The Welsh control did not last long, for it was recaptured by them in 1409.

Constructed of stone and of the Concentric shape and design, Harlech Castle was much closer to the ocean shore than it was in the past. A surviving outside stairway (leading down to a non-existent shore is still present). Althought considered a "slighted" or ruined Castle (in part to Parliamentarian destruction during The Civil War), the order was only partially carried out. Much of Harlech Castle still remains. Some major reconstruction work commended in 1918. Harlech Castle is an excellent example of 13th/14th Century castle-building techniques. 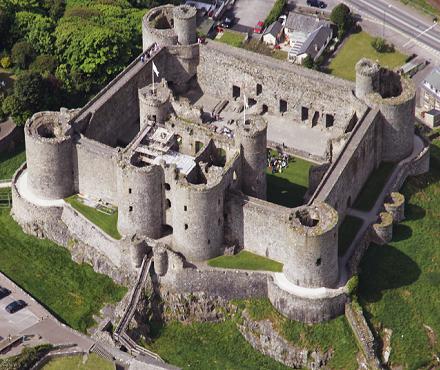