Although these “biscuits” were a common staple of Naval food (seen in The British Navy as early as the 16th Century), during The American Civil War, the biscuit known as “Hardtack” - is storied (and infamously legendary). First issued to soldiers during The Mexican-American War of the late 1840s, the ingredients for the biscuit consisted of flour, salt and water. Compressed into a “hard” consistency, these “crackers” could last for many years (despite probable spoilage). A soldier could carry many such crackers in his knapsack. Eating “hardtack” required several “recipes”. One could not simply eat it plainly. Often, it was soaked in hot coffee (to soften it). Another method was to boil it (into a plyable form). Cooking it in grease was another popular form. Yet still was “pudding” or – rather, a soldier would use his rifle butt to break and mash the hardtack into smaller pieces. Fried or boiled, it would become a mush-like pudding (sugar or cinnamon added – when available). So many jokes, poems and songs were made to “honor” the Hardtack. Often Weevils (small insects), would burrow into the hardtack. A standing joke was a soldier attempting to bite into a hardtack. Pulling his mouth back, this hardy soul said he bit into something soft. “What was it?” another soldier asked. He replied - “a .58 caliber ball!” Still, for all of the jokes (and suffering) endured by eaters of Hardtack, it continued to be issued in some form until after World War I. More traditional “biscuit crackers” are still included with some US Army field rations today (without the Weevils, of course). 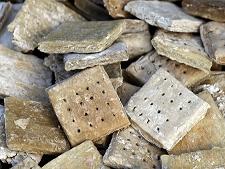