The standard issue for The Federal Army (inclusive of Infantry, Cavalry and Artillery – as well as The US Marine Corps) – it was instituted in 1858. Designed and named for William Hardee (West Point Commandant and Father of the basic infantry tactics manual “Hardee Tactics”) - the hat was of stiff (and heavy) felt construction. High crowned, it featured a wide brim. Although not listed in Regulations For Wear, most soldiers would pin up one side of the hat in a “Safari” style (affixed with a brass Eagle attachment). The soldiers “branch affiliation” was identified by a colored wool cord affixed around the Crown base (Blue for Infantry, Red for Artillery, Yellow for Cavalry, etc.) Similarly, a brass stamped Branch affiliation insignia was pinned to the Crown front (Bugle for Infantry, Crossed Sabers for Cavalry, Crossed Cannon Barrels for Artillery, etc). The Hardee was also known as “The Jeff Davis”.

Jefferson Davis was Secretary of War when the Hardee was implemented (by his authority). Davis would go on to be the first (and last) President of The Confederacy. A major problem with The Hardee was rain. When wet, the Hardee was prone to lose it's shape (often falling into a “felt mess”). Almost universally abandoned by most soldiers, The Hardee would become the official (and recognized symbol) of the famed Union "Iron Brigade" for the entirety of The War. In some cases, wear and tear would eventually turn the once official Hardee into the well known Slouch Hat (most commonly used). 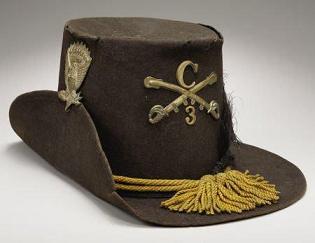