In order to save parchment, European handwriting underwent a major change with the development of the “lower case” letter (or minuscules). Upper case letters (known as Majuscules) - (in combination of usage), meant that many more words could be fit onto one page (as opposed to the traditional all capitol letters commonly used). Capitol letters were then reserved for “ceremonial” books. Scribes (the persons who actually did the intricate imprinting), needed special decorations to emphasize their “point” in the subject matter. Often great “mini Art”, developed from this practice of illustrating a larger letter. Paints made from all matter of organic materials were used to create vibrant colors.

This process became known as “Illumination”. Muslim Nations (huge users and producers of Calligraphy) – were forbade by Islamic Law to Illuminate their works (no human or animals images could be drawn in a religious book).The actual paper “making” process (used for many centuries prior to The Middle Ages by The Chinese), eventually came round to Europe and The Middle East (largely through trade and of course by “trial and error” experimentation). With a standardized formula, paper would become more available to Scribes and Scholars.

It would take MANY months (often years) to produce some of the more elaborate Medieval works. So cost prohibitive, that only the wealthy (or The Church) – could afford such works. Books (and their eventual Libraries), were considered a major piece of wealth and asset. As far as writing and drawing implements, these were constructed using the quills of various Regional birds. Reeds (specially cut and prepared for the needed task), were used as well. Ink, made from Lampblack, soot, Tannin and other organic stains were adopted.

A “Leaded Pen” (very similar to the Modern Pencil, was in use in The Middle East) for Calligraphers. It would eventually make it's way to Europe. With the advent of The Printing Press and formula for an “inking process”, many Calligraphers were unemployed. The mass production of letters and pictures could best be etched into lead plates and mass produced more effectively. 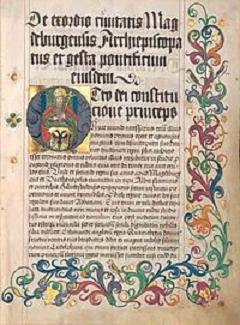