Tracing the origin of the now iconic hand gesture known throughout The World as The “Hand Salute”, is directly related to the early Middle Ages, as a “courtesy” bestowed from one Knight to another – when passing or encountering each other in travel or during times of truce during battle. The Human hand was seen as a method of carrying or concealing a weapon. Any weapon identified on as a potential Enemy. The practice developed (possibly around the 12th Century) during the Ceremonies known as The “Pas Des Arms”, when two opposing Knight prepared to pass each other on horseback, it was deemed “professional ethics” to extend their Sword Arm outward, with their Palm open and exposed to the front of the opposing (approaching) Knight. This established that the Knight was not carrying a weapon for immediate combat and was not (at that point) – a “threat”.

In time, the use of the weapons hand being brought upwards and canted to show that it was empty – was used to convey the same meaning. Eventually (17th Century), it was used more broadly among Combat participants to convey respect between a Higher and Lesser Rank in an Army. The practice is used as such to this day in all World Armies. Style and presentation is different, but the two basic styles used are The Open Hand Salute (indicative of The British and many European Armies) and The Canted Hand Salute (used by The US Military and others). 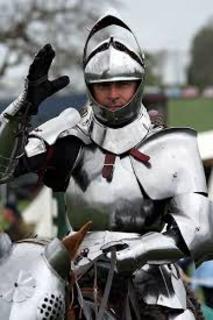