Although in a way similar to the "modern" operations of a Hand Grenade, this device was still very much different. It's origins can be traced back to the incendiary devices pioneered first by the Ancient Greeks and later Persians. The Turks took the idea and refined it more still. In their Medieval European form, the first use of "hand grenades", were documented during The English Civil War, During The Battle of Holt Bridge (1643). Royalist and Parliamentarian Forces would light Hollow Shot and roll them towards an enemy. They were not effective (due to an enemy still being able to move out of the way!). In 1647, a form of cast iron hand grenade was again seen (smaller, but with the same effects and expectations). The term "grenade" appears during The Glorious Revolution of 1688. Jacobite rebels used a form of grenade at The Battle of Killecrankie. They took 2-pound shot (filled with powder - an applied a slow match. When they did work, they did cause casualties from lead shrapnel. It will be many hundreds of years before military technology would catch up with the need for a hand held explosive device that was effective. 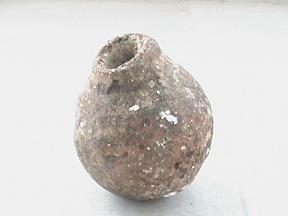