The Rocket as a weapon of war goes back to Ancient China. Further refined by The British Army (The Congreve System), Rockets proved themselves to be an effective tool. By the start of The American Civil War, Rockets were looked upon as a possible more “portable” weapons system over the much heavier Artillery. One of the first attempts was The Hale Rocket. Developed for US Navy use, the land version featured a metal tube, roughly 5 to 6 feet long. Mounted on stabilization poles, an elevation tangent was attached. The rockets themselves were lead projectiles (hollow), filled with different charges (5 to 45-pounds). Utilizing slow and fast fuses of various lengths, The Hale was used in several Civil War Battles. A Confederate version was also attempted. Training and deployment, as well as the confidence of Field Commanders – never really allowed The Hale to be fully developed past Naval use. 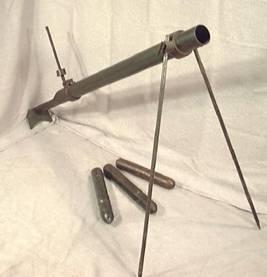