Guy de Lusignan was born in France in 1129. Having grown up well-educated in “military arts”, he was well suited for his “call” to The Crusades. Becoming a fixture at the Court of Jerusalem, in 1180 – he married the recently widowed Sybilla (Heiress to The Kingdom of Jerusalem). She served as Regent to her young Son (King Baldwin). In 1183, Guy became Regent to Baldwin (with full consent from Sybilla). However, knowing of the lack of real leadership within the Christian Kingdom of Jerusalem, Muslim Warchief Saladin spent much of his time attack the Kingdom (and Guy). Through poorly written (and seldom enforced succession laws) – Guy was able to secure the Crown (from Baldwin) in 1186.

Guy's “power” began to unravel very soon after. His wife Sybilla died. To make matters worse, Sybilla's sister (Isabella) – who was married to an even MORE “upwardly mobile” Conrad of Monterrant (than Guy). Isabella and Conrad pressed for the Crown by right of “inheritance”. Conrad amassed a large Army intent on taking the Crown. Guy sought (and got the lukewarm approval of King Richard The Lionheart) – to assist him in the coming fight. It was only verbal. Richard never sent his Army. Guy's small Army was not match for Conrad's, and he relinquished his throne. Fleeing with the “keys to The Kingdom – literally), Guy headed to the Isle of Cypress (Greece), he purchased the Templar stronghold from The Order. The local populace (though small) – had no quams in installing Guy as their “King”. Guy stayed The King of Cypress for just 2 years, dying in 1194. 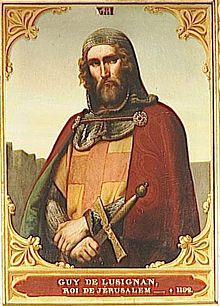