The Gunstock Club (so named by British Militia and Colonial Settlers), resembled the stock of a standard Flintlock Rifle (the lower half portion from the Butt to the lower-half of the barrel slide). The weapon evolved independently of European weapons. Considered a close quarters weapon, The Club featured a sharp metal extension mid-way down. This was used the same as a Spike (striking implement). The upper portion (although wood), featured a steel shank (often sharpened), and used as a War Hammer. The weapon could easily cut through Breastplates and various layers of wood. The weapon was developed by The Mohican, Mohawk and Iroqouis Native American Tribes. After contact with European Colonists became normalized (with trade), solid iron versions were seen more and more. The average length was around 2 to 3 feet long (depending on Tribal fashion). Often highly decorated, The Gunstock Club was considered a fierce and feared weapon among many Colonists. 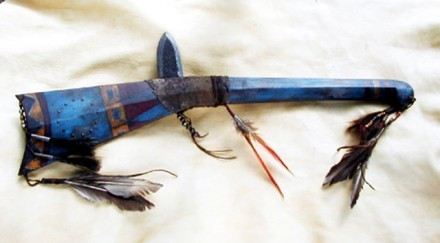