Another iconic and character from American Western History, whose Legend and Myth has completely distorted his true nature, The “Gunfighter” or more aptly “Gunslinger”, was a professional Killer, who more often than not “hired” to perform this task. “Dime Novels” of the 19th Century and later Hollywood Films have completely a skewed the true Gunfighter image. In reality, the term “Gunfighter”, while known as early as 1870, was not in wide usage. “Gunman” was better, as was “Man Killer” and the more sophisticated term “Shootist”. Perhaps the most common term was “Bad Man”.

These Men were expert shots, with most having experience working as Cowboys, Cattle Drovers and Buffalo Hunters. Often, these Men turned to Outlawry, even Law Enforcement. Generally any position which called for the use of Firearms. Speed and accuracy was their watch word. More often than nit, they tried to live in anonymity (with little success).  From well dressed to common clothes, a Gunfighter was constantly challenged. Not from other “professionals”, but regular sorts – trying to make a “name for themselves”. Unlike Films, these fights dud not take place in well ordered “matches” of paced off Shooters. Most Gunfights were quick, brutal and most often at distances of no farther than several feet. Most who witnessed such engagements would not be able to see through the gunsmith for several minutes after, to even determine a “winner”.

Contrary to popular myth, a Gunfighter used two Pistols. His holster was not “low slung” from his hip – with Pistol canted outward. Much as today, they were worn high and close . Still more often, many simply wore them shoved into their waist belt or concealed in a  coat pocket. Many, owing to their Cowboy “Training ” preferred Rifles. The “Pistol Twirl”, an iconic Western symbol, involved the twirling of a gun after shooting and placing back into a holster. This act, while impressive did not happen in a true gunfight, neither was the rapid clicking of the Gun Hammer repeatedly to rapid fire. This was known as “Fanning”.

Despite a Gunfighter general appearance, great care and maintenance was given to their gun. The most expensive were often procured and in most cases modified to the particular Shooters style and skill. Revered and reviled, The Gunfighter lived on the edges of Frontier Society. Often Wanted, seldom were rewards collected. Most Gunfighter who encountered one another, often avoided each other out of “Professional Courtesy”.

Many famous Lawmen in History were Gunslingers who turned to becoming Peace Officers for income. This was due to their speed and dexterity. However, the list of those who were “fast”, is actually quite small. Bartholomew “Bat” Masterson and John “Doc” Holiday were ones. With the dawning of the 20th Century, Gunfighter began to cease. Illegal fighting and duels of this nature were made illegal, with more and more Law Enforcement being hired and deployed. It was Hollywood that revamped and remade the image of the now “classic” Gunfighter of The West. 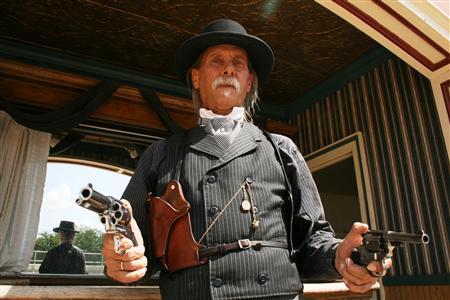