Artisans, Craftsmen, Merchants and other professionals that formed groups of like skills (and fostered trade and services), were known as Guilds. Although the practice of The Guild goes back to Ancient Rome, in the 11th and 12th Centuries became to form again in Western Europe. Guilds were important to a Manor Lord (King or Nobleman). These Craftsmen provided the skills needed to “maintain” Nobility in some cases. They provided a far better quality of services that the lowly (and oppressed) Surf. These Guildsmen often were NOT taxed and paid well.

They were responsible for everything from Stonework, Woodwork, Painting – as well as other skilled Trades (Clothing Manufacturing, Jewelry, etc). Often many Lords would pay their Guild very well (to keep them around). The Guild also served the purpose of early “quality control” in a trade or skill. The Guilds monitored the quality of work and often denounced it (to create more business for them!). The Guild “shut down” many “Non-Guild Members”. Belonging to a Guild was considered an advancement in one's “status”. Guilds charged for Membership (on-going). But the benefit was great.

Many Guilds set aside money to take care of old members would could no longer work. They had funds for Families who may have lost a Members through “work accident”. Guilds also had a form of “Retirement Fund”. Guilds also made sure that only Members could work jobs (and made sure they did!). They also set into motion a standardized payment for work. In most cases, Guild “Masters” would have Apprentices assigned to them. These “recruits” weer often Family members (Sons), who would work “for free” - in exchange for being taught a trade. In most cases (when a non-Family member) was “Apprenticed”, they would receive room and board. In many cases, this was the only way a “poor” Commoner could hope to achieve a “better life”. It was considered a “great honor” to be selected as an Apprentice. In Merchant Trade, Guilds helped to create a better “quality of Product” to import or export. Some Countries were well known for their particular Guild “wares”.

Guilds could often effect the pricing of imports and exports through this practice. In some cases (as in Italy and Spain), some Guilds grew so powerful and influential – that they could manipulate Governments AND Royal Successions. These Power Guilds” grew to be such a problem, that Holy Roman Emperor Frederick II tried to ban Guilds within The Empire around 1219. He failed. Most Guilds were severely effected by the coming of “The Black Death” (Plague) of the 1340s. The sharp drop in Guildmens is attributed to disease mortality. With a lack of quality Craftsmen, Guilds would slowly go back to their pre-11th Century standings. They would eventually pave the way for the more “Modern” Worker's Unions and Service Organizations of the 18th Century (forward). 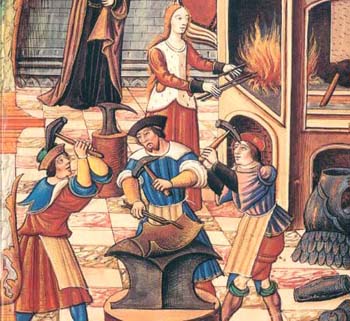