The style and coloring of the standard Service Guidon (with regards to The US Military), was probably first used in the mid-1840s (during The Mexican War). Used to identify Cavalry Units (who needed a lighter flag to carry in charge formation), a typical Guidon is 30 inches by 30 inches. The far right of the flag is triangularly cut in a style known as “The Shallow Tail” (referencing the small bird). There are many color variants used for different Units (in modern usage). In 19th Century terms, it was often the US National Flag redesigned into a Guidon (as was popular with many Northern Units during The American Civil War). In terms of Cavalry, by the 1850s – a red top over a white bottom was the typical Troop identifier. Often the Squadron and Regimental number and lettering were added (in reverse color to contrast). The term Guidon is in reference to a Company or Squad (when in motion) moving in the direction of the Banner or to “guide on” a fixed point (namely the Guidon Bearer). Probably one of the most famous Guidons was the 7th US Cavalry Regiment (Lt.-Col. George Custer's ill-fated command that was massacred at The Little Big Horn in 1876 during The Sioux Indian Wars). Guidons are still an important part of all US Military Units today. 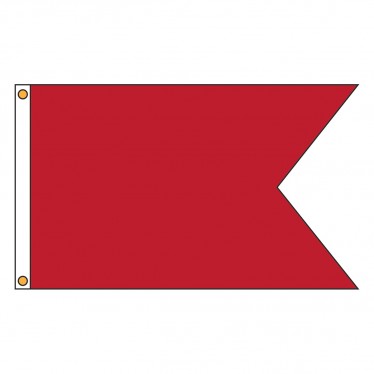