Groom of The Stool

While by today’s standards, the Title of Groom of The Stool would not exist, it was considered not only important, but in fact – the Title Holder was looked upon as one with extreme power and trust. Held by Nobility, the Title derived around the Reign of Henry VI of England. This Gentleman was selected for the task due to his ability to remain quiet about “what” he saw. He was very much highly regarded by his King. In an Age when Royalty were not considered “mere mortals”, it was his task to maintain the cleanliness of a Kings “backsides” as well as the timely removal and disposal of any and all “debris”.

As seen with The Gaberobe System used within Medieval Castles, The Groom of The Stool also maintained a felt or velvet covered wooden box (also known as a “Stool”), upon which A King sat. A circular opening was cut in the top, with a drop top cover. Often, the rear panel was taken out, to allow a bowl to be placed inside. This also allowed some lack “of eye contact” with The Groom and King. Upon completion, the Pot was removed and suitable Abolitions of water were applied to complete the “task”. In cases of a Queen, such work was accomplished by a Lady of The Chamber – which was more closely linked to the later “Privy Chamber”. In fact the very term “Privy” (a Restroom in some Countries) would evolve from this.The Title would continue until (unusually) the mid-19th Century, with Prince Albert Victor (Wales) – who was the known last to have a Groomsman who handled such a task (although to be sure it was while The Prince was a Child). 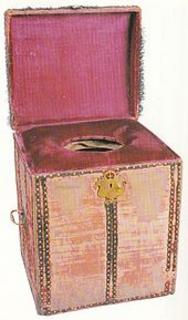