Gregorian Chant – which is also known as Plainsong or Plainchant, was first used in early Medieval Churches in Western Europe (as early as the 6th Century). Although much of the music did not survive past The Middle Ages, some examples have survived into the Liturgical music of The Roman Catholic Church. Legend has it that Gregorian Chant was “given” to Pope Gregory I during is reign in the late 6th Century – by God. It is known for it's marked simplicity – one line melodic. This is different from the polyphonic Church music that emerged during the late Middle Ages. In the early Middle Ages, The Church had 5 liturgies or Public worship ceremonies. The Ambrosian, Celtic, Gallican, Mozarabic and Roman (Ambrosian and Roman still exist). Many parts of Gregorian Chant feature in much of The Roman Mass (and parts of The Divine Office used by Religious daily). Many of the chants were meant to be sung every day, but these are (when used) – set for special ceremonies (Feasts). By the 11th Century, Church goers had developed a more “sophisticated taste” for music. More and more complex melodies began to emerge. Gregorian Chant (as a norm), faded from use. 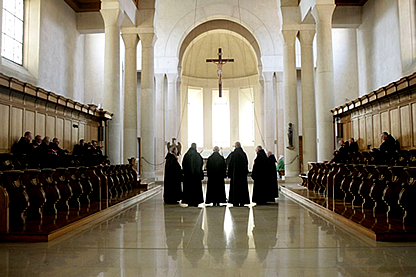