With examples designed around the late 18th Century, The Greatcoat would become a standard item of Clothing issue for most Soldiers of World Armies by the 19th Century. Developed for primarily Cold weather, the term “Greatcoat”, was simple. It was much bigger and longer that the standard Military Coat or Frock. Designed to be worn as an Outer Garment, it could be worn over a Soldiers entire Military gear, with the exception of a Backpack or Rucksack. They were made of heavy wool and mostly made of one color. Even embellishments common to 19th Century European Uniforms were lacking, using mostly a row of Brass Buttons. Some Armies however, did decorate their Greatcoats nonetheless.

The Greatcoat was made to extend either to the upper Shin (Leg), or continue downward to the Ankle. The collar and Cuffs were often designed with more material and were rolled. This allowed a Soldier to rolled down for additional warmth. The Greatcoat would be copied by Civilians of all Classes, and used the same way in Winter. Wealthier Classes had Greatcoats made of lighter material for a version used in Fall Season, and could switch to their heavier versions in Winter. To the Poor, even owning one was a great comfort. Greatcoats would continue well into the 20th Century. By the 1960, most Countries had abandoned them for lighter and more effective materials. Greatcoats are still seen in small use even, with mostly Ceremonial usage. 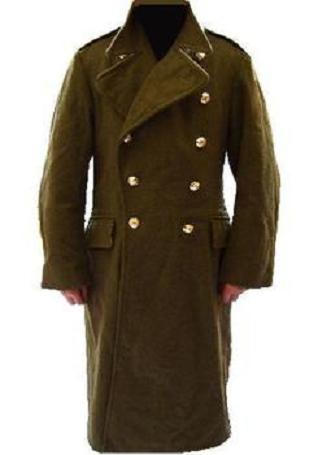