Seals were an important way to verify and authenticate important documents of State in The Medieval Era. Often, a “Great Seal” symbolized exact Royal consent to Trade, Peerage and of course, legal documentation (Warrants, Letters of Marge and Death Sentences). Originally developed from the Royal Signet Ring (worn on the finger of a Ruler, and bearing his “symbol”) - Great Seals became large metal cylinders which featured a finely engraved (and precise) Seal of a King, Queen, or Emperor. ONLY they had the Authority to use such a device. Once a document was “sealed” it was “considered” final. Beeswax (often treated with color) was made into a small block of wax. When heat was applied to a portion, the Beeswax would melt. The resulting hot wax would be allowed to carefully fall onto the intended document. After a suitable amount was gathered – The Great Seal was applied (with pressure). This created an image into the drying wax of The Royalty's (or Kingdom's) – symbol. The practice would eventually last until the late 19th Century. 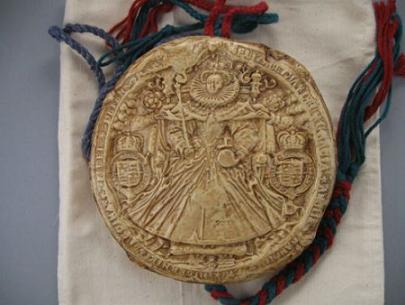