The Roman military award of The Grass Crown, was one of the rarest and most distinguished award in the Roman Army. Only a General or Commander could earn this award. The elements of award were quite specific. If a Legion was surrounded by an enemy force, the Commander of the reliving force that broke through - won the award. Made from surrounding plant material of the battlefield in question, often flowers were added as well. Not to be confused with the Greek Laurel Wreath. An ancient Roman tradition involving the Grass Crown, centered around the Commander of a victorious Legion entering Rome at the head of his troops. A household servant or slave would stand behind him on his triumphal chariot - holding the Grass Crown above his head. The slave would repeat the phrase "All Glory is Fleeting". Another (albeit from Shakespeare), was "Remember, Thou Art Only A Man" - meaning like the Dictator Sulla (who took Rome by force), "Don't get any ideas of taking over!" 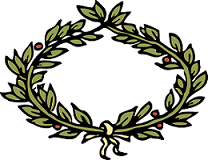