Developed around the 16th Century (with stone shot versions extending back to the 14th Century), the perfected version of this projectile featured a mass of metal slugs or balls tightly packed into a fitted canvas bag. A “priming packet” was attached to the end of the projectile. Later versions featured iron or wooden plates with a retaining bolt or screw compressed down the center of the construction for stability. As the projectile was fired, it was designed to expand (as with a Shotgun shell pellets). The large, 70 to 90 caliber lead slugs (resembling Grapes), would spread out and hit advancing enemy forces. Maximum injuries and death were created at ranged of 100 to 125 yards.

The Grape Shot was very effective for breaking up cavalry and infantry charges, or for keeping an enemy from advancing from their fixed positions (by air bursting over their heads). Grape Shot was also highly effective in Navies during sea battles. Grape Shot was capable of destroying sails and ship's rope rigging. It also would “level” a Quarter Deck of enemy Sailors preparing for Boarding. Tactics involving using 2 combined Grape Shot projectiles where known as “Double Grape” was was devastating. In some cases, Grape Shot was used as a round of “last resort” when faced with an indefensible position. 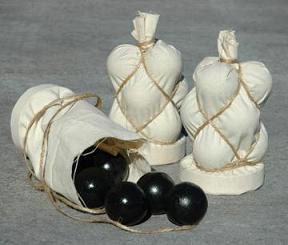