As we have seen, Females were no stranger to the life of The ''Sea Wolves'', or Pirates of the 17th Century. One such was Grace O' Malley. Grace's story is probably the most recorded and re-told, often merging much of her legend with that of other Female Buccaneers. Born around 1503 AD in Connacht, Ireland, Grace was actually of ''Noble stock'' (Gentlewoman). Her Father maintained Coastal Fortifications in that Country for England. As His only Heir, Grace would inherit his Title and property (a rare thing for a woman of The Era). Grace was educated and used her skills to further her fortunes. Her Father, who also maintained a Fleet of Irish Coastal Ships for protection of shipping took Grace to Sea.

Married several times as political moves, her last Husband was killed by English Pirates, of which Grace sought redress. Not forthcoming, She took to a life of revenge – entering into her life of Piracy. In addition to the Coasts of Ireland, Grace attacked British Commerce Ships off The English Coast with great success. In 1593, Grace's two Sons were captured by British Privateers. This lead to an unusual encounter between Her and The Queen of England, Elizabeth I. Well known, a Parley was arranged between Queen Elizabeth and Grace. Dressed every inch a Lady, Grace was still Irish and did not recognize The Monarch as her Ruler. She refused to bow or render property ''Royal due''. Rather than anger, Elizabeth was impressed with another Woman as ''strong and determined'' as Her.

An accord was met in which Grace was to cease Her Piratical activities on Elizabeth's Commerce in exchange for her Son's release. Grace wished the Privateer who captured them arrested. This was agreed to, but later Elizabeth failed to follow thru. Now ill, Grace dismissed an earlier plan to resume her attacks on British Shipping – happy to have her children back. Retiring to Her home in Ireland, she would die in 1603. 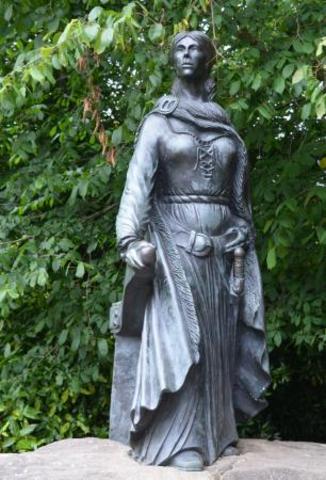