Often associated with an Occupation seen during The High Middle Ages, the somewhat ''distasteful'' but necessary ''Gong Farmer'' was a Tudor Era coined word to denote ''someone who gathered up Human solid waste from Privies (Toilets of both Public and Private usage), as well as Cesspits (larger outdoor and often untreated waste storage areas). The word ''Gong'' is Old English for ''To Go'' (as One was expected to regularly and as a ''Gong Farmer'' was seen as the ''remedy'' to the ''end result'').

Not a particularly sought out Position, ''Gong Farmers'' (while at the very lowest level of Society) – occupied a nonetheless important role. In an Era in which in-door plumbing was unheard of, and Plagues were a ''seasonal'' plight – the need for People to remove human waste from a Village, Town or City was crucial.

Often difficult to recruit, one interesting figure from The City of London illustrates such difficulties. In the years 1420, only (16) Gong Farmers were employed by The City – to remove the waste of 30,000 Households. Slowly determining the extreme need to remove human waste from Cities – due to the real fact that such waste attracted vermin (which carried Plague), many People built their own Cesspits in their very back yards! They threw their ''Chamber Pots'' thus. ''Dong Farmers'' were paid to remove ''Communal Pits'' (and made side funds removing Private ones (despite the fact that many were illegal by Edict).

Transported by Cart to fields outside The City, large Cesspits were to be burned (at some point). Overworked, many were not form many months (in some cases several years) thereafter. The result acrid smoke (long seen as a form of disease inducing component), would often waff through a City. It was well known by most Royals and those well off, that they needed to move to ''Summer Homes'' during the season of ''burnings''.

Payment was not good. ''2 Shillings per Ton of Waste'' was the ''going rate'' for a Gong Farmer. Farmers were subjected to all forms of contagion in the course of their employment. They often brought Orphan Boys from Orphanages and had them do the physical ''work'' of ''bucketing out'' waste from the Pits for burning. Later, by the 17th Century – Gong Farming was replaced by Scavengers (who removed chamber pot waste). These Groups were regulated the same as the earlier Gong Farmers. These poor wretches had it even worse. They had to scrape up the waste from the streets outside of Homes (by all Classes), who regularly simply ''threw out the contents'' from a window or door into the streets. 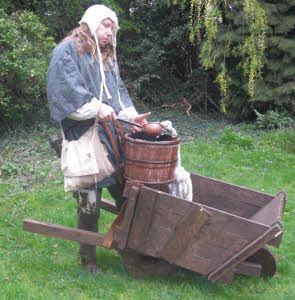