Seen around the 9th Century (in France), The Goliards were a strange sect in The Middle Ages. Taking their name from Church Bishop Golias, their “religious views” quickly disappeared in “The World”. Vaguely resembling “Friars”, they wandered the countryside being quite the opposite. They espoused a more “earthly life”. They sought pleasure and adventure. They drank, promoted free love and most of all – gambling. The concept of responsibility was lost with The Goliards. They were best known for their poems and writing of the day . The “Goliardic Poets” poked fun at The Church and Clerics (and were well into the vein of England's later Geoffrey Chaucer – just more raw). Many historians felt that The Goliards may have actually been learned men who used the fictional “Brotherhood” to vent their views on the excess of The Church.

Written mostly in Latin, they were translated into French, German and English. The poems were possibly designed to be sung (very similar to a Troubadour style of music). One of the more famous of The Goliardic Poets was The Archpoet (whose real name is lost to history). His work “Carmina Burana” gives the most complete version of Goliard life. The Church eventually cracked down on anyone or anything considered Goliardic. Excommunication (or worse) awaited a professed Goliard. Fewer and fewer participated in the lifestyle (and poems). However, their style of prose/singing would still prevail with the appearance of The Minstrel. 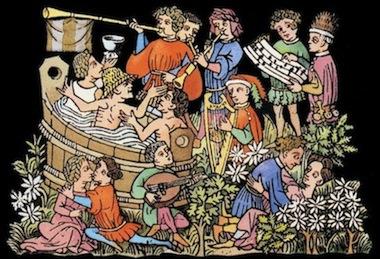