This unusual weapon made it's appearance in the 14th Century, most notably during the Franco-Flemish Wars. The weapon is basically a club-like instrument. The shaft of the weapon could be upwards of 5 feet long with a 3 to 4 inch diameter. Tapered wider at the end, a spike was attached by a tang. Thus this weapon had a dual purpose as a spear and club.  The term "Goedendag", has MANY origins (and legends). One popular, is that while Flemish Militiamen were looking for enemy French during the Bruges Massacre, they would call out "Goedendag" (Good Day in Dutch). If a French accent responded back...whack! This story may have more appropriately developed form a similar version of the phrase used as "Shield and Friend" ("Schilt Ende Vriend").

The weapon has also been speculated as being used as a "second line" implement. Placed behind Pikemen and Halberders, this could obviously cause damage to an assaulting enemy who got through the first rank. Although many examples of Goedendag heads (both steel and iron) exist from archeological sites, no surviving examples survived. Versions seen on display are often reproductions (some modern made, others only several hundred years old). 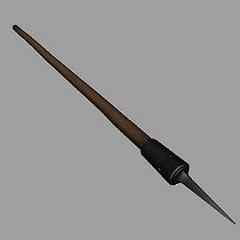