Glossators were a Guild of skilled ''Copyists'', who for pay – copied important documents for Nobles, Royalty and in some case, The Church. It took great skill and education to become a Glossator. Tracing their origins to the late Roman and Byzantine Empires (3rd to 5th Century AD), many were commissioned to copy some of The Middle ages most important and in some cases, enduring works.

Most noted, was The Code of Justinian, which was copied from it;s original into The Latin Vulgate. By the 14th Century AD, The Church had become exclusive with many Monasteries to copy and produce books and legal documents. Many Kings and Queens, retained their own ''Copyists''.

With the advent of The Printing Press in Germany, many Glossators simply sought other vocations. However, much of Medieval Law (which evolved from the older Roman precepts), had been ''Glossed'' (as was the common term). These documents would serve as the foundations for European Law. 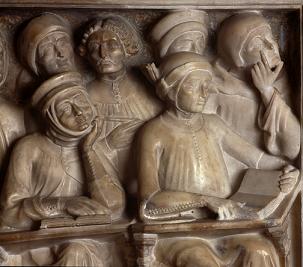