The People of The Middle Ages were well aware of Glassmaking prior to their Era. The Art of Glassmaking reached it's zenith with The Byzantine Empire and the majority of The Muslim World (where glass was produced for windows, as was a common use for them). In Asia Minor and The Balkans, the art form advanced with the development of colored glass. The Italians were well versed in Glassmaking (especially with Ancient Rome). Venice too, would distinguish itself as a center for European Glassmaking techniques. Only in Western and Northern Europe did Glassmaking lag behind. The quality of glass was poor – perhaps because Europeans had a limited supply of soda (the salt compound needed to make glass). It was only available in The Mediterranean Region).

A suitable substitute was found with potash (a potassium compound produced from wood ash). With plenty of wooden areas, Europeans had a somewhat easier time in making glass. The exception is that glass made this way will deteriorate faster (ergo not last as long). Progress in Glassmaking throughout The Medieval World came with the 12th Century. Traced next to Romanesque architecture, larger religious buildings (Churches, Cathedrals, etc). - had many larger windows and the need to use (and produce more of) glass.

The solution to all pf the problems was a new technique of glassblowing. All the needed materials were melted together in a furnace. When proper temperature was achieved (viscous), they were removed and place on the end of a long stick. The Glassmaker would then blow and spin the glass until the desired form was attained. Towards the end of the 12th Century, another innovation took hold. Copper and Iron was mixed into the mixture. This would help in the creation of Stained Glass. 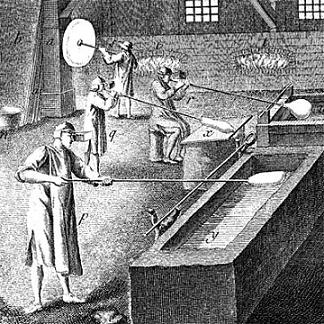