The word "Gladius" actually came to identify any type of Roman sword. This was a common 1st Century B.C. practice (in the Roman Republic Period). As time progressed, historians have found many different variations of just what a "true" Gladius was. Gladius' were "traditionally" a double-edged blade with a point. They were used primarily for stabbing (with cutting and slashing being a secondary practice). They had a large solid grip with a curled grip (for better control). They handles were wooded (or more ornate ivory or bone for Officers).

A large pommel/roundel was added (as balance and as an excellent striking weapon). In terms of blade length, the Gladius needed to be strong. Often metal segments were heat welded together with a channel groove running down the center. Another technique was the use of high-carbon steel (set in a cross-sectioning pattern), also for added strength. Although as stated, there were MANY different type of Gladius, the most known version had a blade length of 17 to 19 inches in length (with other comparable types ranging from 12 to 25 inches). Roman Officers often had their names and rank (or position) engraved into their blade (along with other "tributes to The Gods"). Most soldiers were taught to stab into the abdomen of their enemies (a blow that was almost always fatal when made by a Gladius).

Other effective methods were cut and slash at the knees and legs (often administered from behind the famous Roman Shield Wall). Most often carried in a scabbard (wood, leather or metal), Officers often wore them on the left side (as a sign of difference). Towards the end of the 2nd Century (and early 3rd Century B.C.) - the Gladius began to be replaced by the Spatha blade. Still, when one thinks of "The Legions", one thinks of The Gladius. 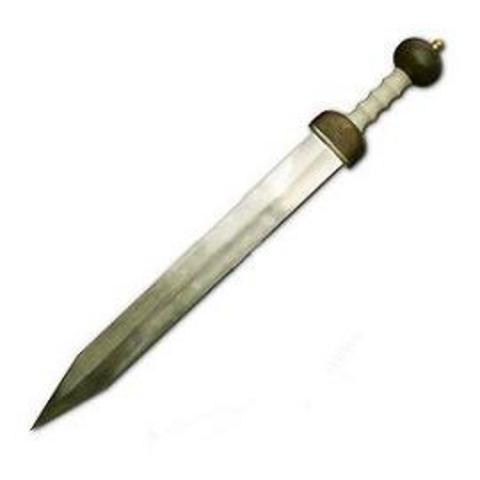