Gladiators were trained Combatants who ”performed” various “blood sports” for massed Crowds during Ancient Rome. Their popularity rose and fell (depending on the Period, or more closely – Emperor). Seen as far back as 5th Century B.C. - The Gladiators “ruled” for nearly 1,000 years of Roman existence. They would best be described today as part “Celebrity” and part “Sports Figure”. Although placed low on Rome's ever important “Social Ladder”, they served an important role in maintain a sort of “Roman Peace” between a populace and it's Emperor. Often used as a form of distraction from long running (and unpopular) Wars or “difficulties” with local Governing, great and lavish “”performances” were developed. Often, gambling and betting were a staple for “The Games”. Often, many weeks (even months) of such “Events” were scheduled (to the delight of the Titled and Commoner, alike).

Gladiators “came” from many sources. Mostly slaves (captured in battle), Gladiators could also “come” from the “Freeman” Class. Poor (but possibly robust) men (some ex-Legionaries), would seek out this form of “existence”. It was not necessarily money that attracted these types. Often it was fame and the often lavish lifestyle afforded a “Champion”. Such “Headliners” were rare (but NOT unheard of). Having “survived” the “horrors of The Games”, made such men a valuable commodity to Gladiatorial School Owners (and their “Bookies” as well!).

Once a suitable “collection” of slaves were gathered (mostly of warrior classes or Regions known for “fighting men”), Gladiatores Schools would send “Buyers” to the local Slave Markets to procure them. Expensive, once brought, great care was taken with them (contrary to what Movies have shown). A future “Fighter” was often preened and cared for. Given over to “Trainers”, he would spend long and physically demanding hours training in the various weapons and tactics of “The Arena”. The Arena was a large amphitheater-type structure (known well to Romans – and others). However, instead of Plays and Comedies, special Fighting Arenas were constructed for this purpose. Every major Provence of Rome had some form of Gladiator Arena.

After suitable training and “assessment”, a Gladiator was given a fighting “style”. This style defined his weapons and armor-type used. Specialized Fighters fought like fighters (although, to keep it different – sometimes they were “mixed”). Weak or sub-standard Fighters often were used first (whereas they were easy kills). Often quickly killed, this also thinned out the Ranks. Often elaborate “battles” from Roman History were staged to the delight of the Crowds. These were very popular during The Roman Imperial Era.

Often, should a certain Gladiator survive most of his “bouts” (and retain some popularity as well), he may be set “free”. To commemorate this, The Emperor (only), would present the Gladiator with an award called a Rudius. These were small wooden Gladius Swords. This symbolized his freedom and acceptance as a “Citizen”. Often, these few men would set about to form their own Schools (or become Trainers). At the end of the 4th Century A.D. (and the legalization of Christianity as Rome's State Religion), the Gladiatorial Events were outlawed. 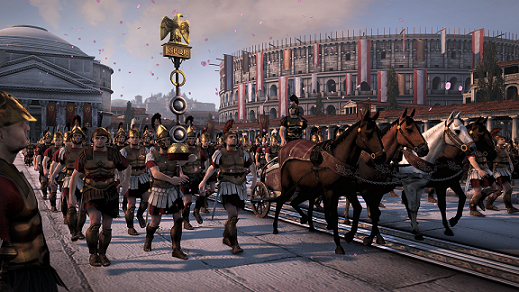