Although Germany was on the "cutting edge" of "lighter than air" Aircraft in the early 20th Century, by the end of the 1930s - Germany had fully embraced a "Modern" Air Force. It still nonetheless, maintained a small Fleet of Zeppelins. Still considered ideal for Observation Craft, The Zeppelin Corps. was Headquartered in Berlin, Germany in 1939. However, by 1940 - Hitler decided to disband The Corps. with Staff being reassigned and The Zeppelins broken up. The short lived Corps. Flag was a Red Field in entirety. A Black Saltire Cross was centered to create a quartering effect. Centered in The Cross, was a large White Globe -upon which wad placed an Airship. A German Eagle surmounted all. Finally, The Nazi insignia of The Swastika was placed underneath in the center lower panel. 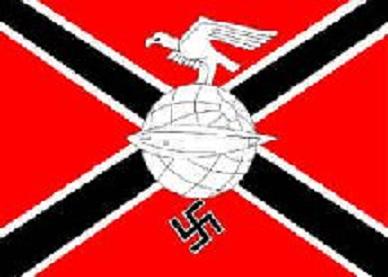