Deployed in 1943, The Werfer-Granate 21 was The German Luftwaffe's first attempt at using Rocket munitions from Aircraft. The Missile was a contained Device which was electrically fired from a Pilot or Gunner. They were mounted in Launch Tubes mounted under Wings of Aircraft. They were based of both French and Britain designs attempted with various levels of success in World War I. The advent of tightly formed Allied Bomber Squadrons over Germany caused a problem for Defensive Fighters. The Bomber tactic allowed for a greater concentration of Aircraft weaponry, making direct attacks very difficult. The deployment of The Granate 21 was seen as a method of using a high impact weapon against a target at greater distance (thus preserving an attacking Aircraft). The Werfer-Granate 21 was a solid fuel Missile which was stabilized in flight by rear fins. It used a 90-pound Warhead which could achieve near 700-mph speeds. It had a 1,300-yard range. The blast range in air (if not a direct hit), was roughly 100-feet.

A problem with the early Granate 21 deployment was that the weight of the near 100-pound Warhead caused The Rocket to have difficulty in not dropping in flight velocity before reaching it's target. This made it only moderately effective, and caused Pilots to have to get closer to a target (thus defeating the initial tactic need). Despite this, The Granate 21 was still seen as a method for “breaking up” Allied Bomber Formations, thus allowing for other Pursuit Fighters and Interceptors to attack. Refinements late in The War (1945), solved some of the issues – as variations were mounted on the various German Jet Fighter attempts. However by this time, The War was over for Germany. The captured design specifications of The Werfer-Granate 21 design would be experimented with by bothe British and American weapons designers, with some being incorporated into many “First Generation” Fighters of the late 1940s and early 1950s. 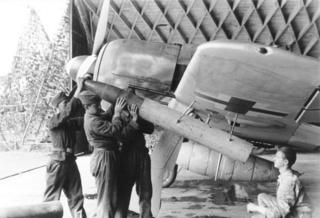