The German VT-Tank (Versuchstrager 1-2) was a Cold War Military Weapon, first deployed in 1974 by The West German Army. It's primary design innovation, was that the VT was Turretless. As such, The VT was seen as a ''Tank Destroyer''. Initially a joint design and cost venture of both Germany and England, Great Britain withdrew when confusion developed over that Nation wanting a Turreted Tank. As such, only (7) Models were produced. It's flat profile was seen as crucial for presenting a ''low profile'' to traditional (then) Soviet Armor. Speed was also stressed (as The VT was fast and agile enough to ''zig zag'' with great ease, unlike other Tanks). After 1978 however, further deployment and production was halted, and The VT was withdrawn from West German Army use.

The VT was 43-tons, and measured 25-feet in length with a width of 12-feet. Crewed by (3), The VT was a fixed dual track, which was powered by a single MTU Ra-500 Diesel Engine. Land speed at maximum was near 44-mph, with normal operations at around 25-mph.The second innovation for The VT Tank was that it supported twin, side by side Cannon in the 105mm to 120mm Range. This placed The VT into a range of 4,000 to 8,000 yard targeting. 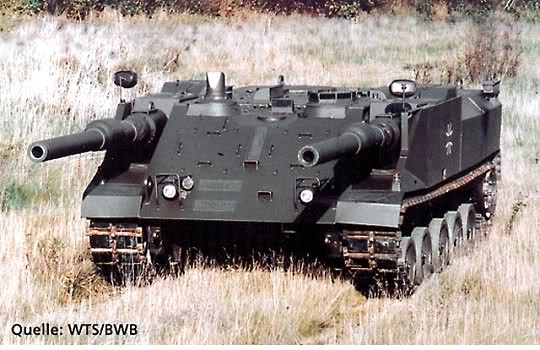