One of Nazi Germany’s last “Retribution Weapons”, The V-3 was a form of high-pressure Cannon – dubbed a “Super Gun”. Unlike many of Hitler’s “Wonder Weapons”, The V-3 actually was created and briefly deployed. The V-3 existed between 1944 and 1945. The theory of such Artillery Cannon than could fire many hundreds of miles without a continual rocket propulsion system, was not new. In fact, in The US by 1857 – several ideas had been advanced in which “Accelerating Guns” had been seen as feasible. In fact, in the 1880s, a Prototype was built – but did not work as effectively as was thought. This did not diminish the principle of development, and it was revisited in the 1930s in Germany.

The principle for creating the High Pressure Pump Cannon (“Hockdruckpumpe”), has a series of tubes interconnected and sealed. The length is not an issue, for the longer the tube set-up the better the ability to achieve a higher rate of speed. Located along various spaced and measured sections, are secondary explosive charges. These are angled to create a form of “side” energy or push force which is designed to move a Shell ever forward. The more explosive charges, the faster (in theory), the Shell will travel, until it reaches it’s calculated maximum velocity (estimated at 300-miles per hour).

Code named The “Busy Lizzie”, plans for The V-3 went into construction in 1944 with the establishment of Mimoyecques Fortress in France. Part of “Operation: 711”, The V-3 began to take shape under forced labor. Mostly an underground Fortress, 25 such V-3 Tubes were constructed for the eventual use of bombarding The City of London. It was determined that at least 140 such rounds per minute would hit London per minute. Such a bombardment was said to be “non-stop”. Each Shell was rated at slightly over 300-pounds with each advancing side charge around 160-pounds.

Several successful firings into Poland were made. Allied intelligence began an all out effort to destroy The V-3 Cannon, with continued Air Raids. The largest of which involved the famed “Dambusters” Squadron of The British RAF. The destroyed much of The V-3 Sites using the infamous 12,000-pound “Tallboy” Massive Ordnance Bombs. 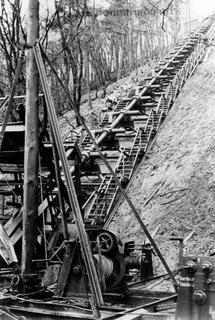