Part of Hitler's "Revenge Weapons" (Vergeltungswaffen), The V-2 was the 2nd Version of Germany's Rocket Program. The first, The V-1 successful - but needed design flaws corrected. The V-2 was that replacement. The Rockets Missile was 13-tons and was 46-feet tall. It had a 5.5 foot diameter. The warhead was 1-ton of High Explosive. The reactive engine was launched by a 4-ton combination of alcohol and liquid oxygen. This gave The V-2 a thrust of 52,000 pounds (the equivalent of 600,000 HP).

12-foot stabilizers helped the Rocket achieve it's operational ceiling of 116-miles and a top speed of 3,500 mph (Mach 5). The V-2 had a 225-mile effective range. They were mostly launched from lower elevations. They were for the most part, quiet (unlike Germany's infamous, V-1 "Buzz Bombs"). First deployed on September 4, 1944 - The V-2 Series had an estimated 500 launches and were responsible for 10,000 deaths in England. The V-2 Launcher Bases and assembly points became a major priority for Allied Bombing missions. Most were eventually so crippled after 8 months of deployment, The V-2 Program was finished. The German Rocket Program would be captured by The Allies. It would serve as the forerunner for future ICBM (Intercontinental Ballistic Missile) weapons. 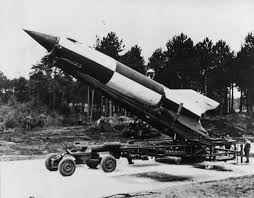