One of the short lived departures from the traditional German "Stick Grenade", The Type 17 was nicknamed "The Egg", by Soldiers, due to it resemblance to an Egg. Lighter and smaller, thus gave the average Soldier the ability to throw one up to 40 Meters farther than other Versions. First deployed in 1916, The Type 17 was 2.4-inches long, with a diameter of 1.8-inches. It further weighed close to 1-pound. The specialized explosive charge was parts standard Gunpowder, combined with Aluminum and Barium Nitrate (32 grams). The iron shell served as it's fragmentation component. The Type 17 had a 25-foot "Kill Radius". A Primer Pull Pin, it's slow fuse gave it a 5-second detonation time. 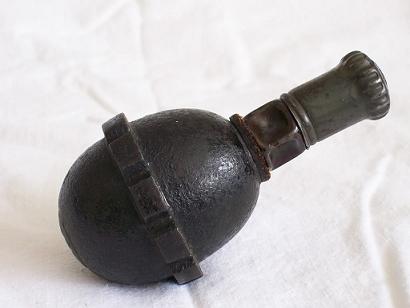