Also known as The ''Oyster Shell'' or ''Pan'' Bomb – The ''Turtle'' was an impact detonated hand grenade designed by The Imperial German Army around 1913. The device was The Army's first prototype design of a working hand grenade which would be used in the opening phases of World War I. A flat design, The ''Turtle'' (so named for it's resemblance to the reptile's outer protective shell) – was roughly 6-inches in diameter. A series of impact plug fuses were installed around the perimeter of the grenade. These fuses were timed to detonate (if engaged thru impact against a hard surface). As many as 5 such fuses were placed (to ensure a detonation).

Aslso known as The ''Discus'' by The British Army who encountered them in combat, it was quickly found that The ''Turtle'' failed to detonate more that it exploded. In some cases – during Trench Warfare, British Soldiers were able to pick up the devices and literally ''throw them back'' at The Germans. The design was quickly replaced by the new design of The ''Ball'' Grenade, which would also be quickly replaced by the iconic ''Potato Masher'' Grenade, around 1914-15. However, some ''Turtle'' Devices were still used. In some cases, they were adapted as Wire ''Hanging'' Mines or simply buried in from of German Trenches. 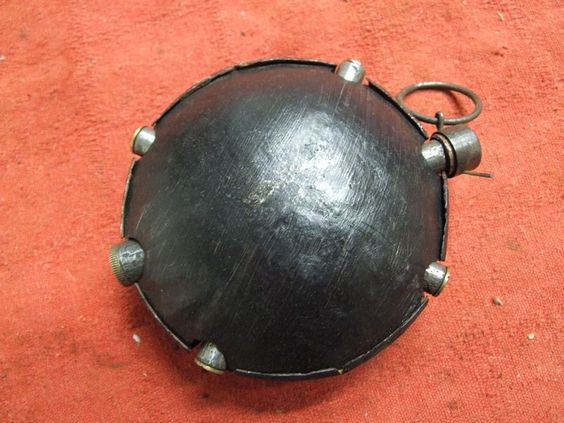