The German Sturmmorserwagen (which was better known as The Sturmtiger, was an Assault Tank developed in 1943 for Germany’s Wehrmacht. Not deployed until 1944, The Sturmtiger was a Rocket Propelled Artillery Cannon, which was mounted on a modified on a Tiger I Tank chassis. With only 19 produced, The Sturmtiger was used as an Urban Pacification and Infantry Support weapon, used with great success on The Western Front. The Sturmtiger was a major components used by Germany during The Battle of The Bulge on Belgium (1944). The Sturmtiger weighed 70-tons and was a Tracked Vehicle. They were 20-feet long, 17-feet wide and 10-feet tall. Crewed by 5, The Sturmtiger was powered by a Maybach Water cooled V-12 Diesel Engine, capable of 25-mph on both battlefield and normal road conditions.

The armament for The Sturmtiger was it’s primary 380mm Gun. The Barrel was only 5-feet long, but it fired a combination of 88 to 200-pound Rounds. The maximum range was 6,000-meters. They carried normally around 14 varied Rounds. A secondary defensive weapon of a 100mm Grenade Launcher and a 7.92mm Machine Gun. Armor plating was robust at 2 to 5-inches throughout. The Sturmtiger was used until the end of The War in 1945. Many survived and are displayed throughout The World. 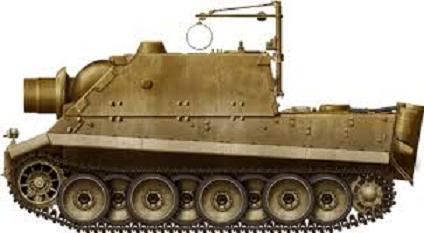