The German Sturmgeschutz III was a World War II fighting vehicle. It was one of the most produced armored vehicles used by The German Army during The War. Reliable, The Sturmgeschutz III was used on all War Fronts between 1940-1945. So reliable in fact, survivors of The War would be incorporated into The Israeli Army and saw deployment in the 1960s Six Days War. Weighing 30-tons, the Sturmgeschutz III was 23-feet long and 10-feet tall. Crewed by (4), The Vehicle supported 1.5 to 2-inches of armor plating throughout. A dual tracked vehicle, it used a Maybach V-12 Gas Engine, capable of producing 300-HP. Speed was rated to 25-mph. Armament varied, but the primary gun was 7.5cm Cannon supported by (2) 7.92mm Heavy Machine Guns. 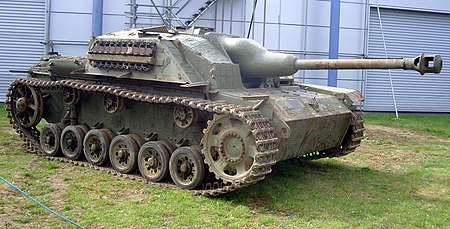