With (24) such produced for The German War effort of 1942-1945, The Sturm-Infanteriegeschutz 33-B was a Self-Propelled, Infantry Support Platform. The weapon (dual tracked), had an elevation of only 3-degrees with a 25-degree angle traversing ability. The 33-B saw it's first role in combat during The Russian Invasion of Stalingrad (Russia), and were moderately effective. The course of The War slowed down progress of future production to only it's original run. Weighing 20-tons, The B-33was 18-feet long and stood 7-feet. Crewed by (5), The 33-B used a 12-cylinder Maybach Engine which produced 256-HP. Rated speed was 68-mph. The primary Gun used was a 15cm Sig 33, with a 5,100-yard effective range. The secondary Troop support weapon was a single, 7.92mm Machine Gun. 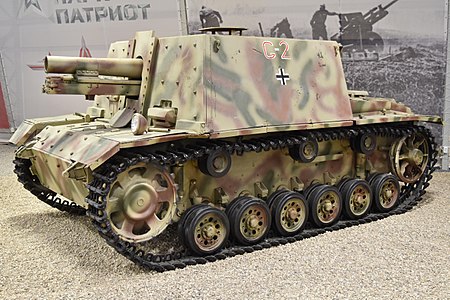