Considered by many to be the first "true" Assault Rifle, The STG 44 (also called The MP 44), was created by Hugo Schmeisser in 1943. The weapon was capable of both semi and full automatic fire, by way of a selector switch. Light at 10 pounds, it wad also only 16 inches long. Firing a 7.92mm round, The STG 44 could fire between 550 and 600 rounds per minute. The weapon featured an effective range of 300 yards (semi) and 600 yards (automatic). The STG 44 was a gas operated weapon, with a blowback cyclic rate. Considered effect on The Eastern Front during World War II, it's late deployment  (1943) was too late to be effective in "turning the tide" (for Germany). Over 4,000 were produced until The War's end on 1945. Adolf Hitler called it "The Sturm Gun", due to the massive amounts of bullets it fired - liking it to a "storm of bullets". The basic idea of the Weapon would serve as the initial prototype for many other weapons of the same type , used even today. 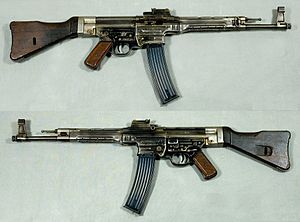