Designed in 1916 as an obvious replacement to the traditional German Pickelhaube Spike Helmet, The Stahlhelm would become the most iconic piece of German war history. It's basic design would continue into the 1990s with a “rebirth” into The 21st Century (by The American Army). It's simple yet effective design incorporated protection not only to the entirety of the head, but the sides of the face and neck. Constructed of 1 piece of shaped steel, it featured a sweeping flange around the sides and back. Very effective in its designed style, The German Army would continue to use the design for many decades. Later Imperial versions expanded on The Stahlhelm design by making it “longer” in it's side flange design (even going so far as to incorporate a camouflage pattern). Another innovation was “cooling” vents built into the sides. A problem with this design was that the holes would become clogged with mud (or freeze in Winter). Many other Germanic Nations adopted The Stahlhelm as well. A current design (made of Kelvar) was adopted by The US Army. 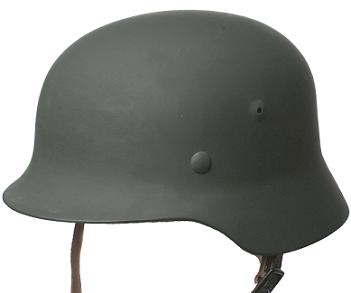