As we have seen, SS Leader Heinrich Himmler created various decorations to be issued and worn by members of his Officer Corps. Although The Ehrenring was the most coveted, several other "functional" ones were given as well. Two such, were The Honor Sword and Dagger Sword. As with most German Officers, the issuance of a Sword Dagger was an important part of the Uniform. Normally issued only to German Staff (General) Officers, their appearance was derived from the Ancient Roman Short Sword  (The Gladius). Although not as long, these blades were seen as a symbol of Rank. The SS version was patterned after most blades of The Reich. Featuring a double-edged blade, it was 1-foot in blade length and 3-inched in width. They featured a Baselard open faced grip. The iconic "Adler Eagle" relief was placed on both sides of the grip. In addition, The SS symbol was likewise placed, closer to the "T"-shaped Pommel.

The Dagger Sword was carried in a scabbard, which was attached to a Hanger Chain. These often elaborate connectors were attached to the waist belt. Although it could be used as a weapon, The Dagger Sword was used strictly for ceremonial purposes. The Honor Sword was (as were most ceremonial blades), too seen less as a weapon and more as an Award. Given to SS Officers and NCOs whose leadership of their commands distinguished themselves, were issued this Sword. A "D"-handle which was covered in a fitted leather grip, thus was wound in steel wire. The SS insignia was placed on both sides of the grip and the Pommel. Typically, a Honor blade was 4-feet long and were Rapier Blades (single-edged and slender).

Finally, a Sword Tassel (or Knot) was attached to the Hilt. Also known as a Sword Rope, these were White and bore The SS insignia. Although decorative, they harkened back to an Era, when they would be attached to the wrist. In this way, if a solder dropped his Sword, it would go no further that the length of the lanyard rope. The blade of The Honor Sword was most often engraved with the name of the Recipient, his Unit and date of the Sword's award. 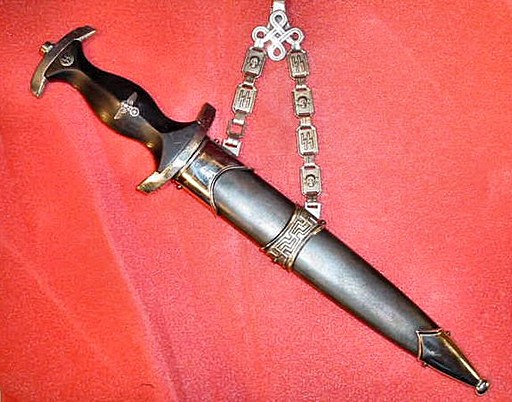