Iconic as it was infamous, The Ehrenring was a highly sought and coveted award of Heinrich Himmler's Schutzstaffel  (SS). Known as "The Death's Head" Ring, it's Symbolism - The Toten (Skull and Crossbones), were actually linked to Germanic and Prussian Military usage going back to the 18th Century. When Himmler founded The SS, he wished to create an Award for Senior Officers of his Organization, that was unique. Hence, the creation of The Ring. Heavily linked with Nazi Germany mysticism (The Thule Cult), the ring was pure silver. The outer band contained engravings of the 4 principle Rune symbols used in that belief. These were the Sig, Hagal, Hakenkreuz and Heilszeichen. The front of the ring featured The Toten.

Inside the ring band, was by Regulation - the name of the Recipient, the date of the Award and an engraving of Himmler's signature. From 1933 to 1939, only 5,000 were issued. After 1939, any SS Officer could be awarded The Ehrenring  (with 3 years of Service). The Ehrenring had definate regulations regarding it's final dispositions as well. Once an Officer retired  (was dismissed or killed in battle), all reasonable means we're used to return the ring to The SS. Himmler collected the and kept them in a sealed chest at Wewelsburg Castle (SS Headquarters). The chest became a type of SS "shrine" of sorts. In 1944, Himmler discontinued the issuance of The Ehrenring. Ordering them gathered up, these and the previous cache were sealed in a tunnel near Wewelsburg, and was-sealed. However, of the 14,500 issued, 26% were not returned or were unaccounted for. 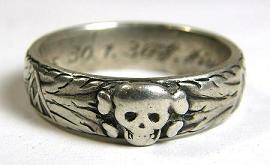