The German Secret Police, known as The Geheime Staatpoliezi" - or by their better known name "The Gestapo", was created in 1933, as an off shoot of The Waffen SS. Their first Head or Minister, was none other than Herman Goring (1933-34). The infamous psychotic Heinrich Himmler would take Command from 1936 until 1945. The mission of The Gestapo was to provide for State (Nazi) Security, protection of Heads of State within The Party, Intelligence and Counter-Intelligence (Espionage). They were highly effective and ruthless. Their Standard was designed in 1936. It wad a Quartered Tricolor. The Top and Bottom Triangles were Green. The Left and Right Fields were White. Centered was a Gold Adler Eagle, surrounded by a large Golden Wreath. The NSADP Swastika was placed underneath the Eagle. The entirety of the Flag was bordered in Gold fringe. It was used until 1945. 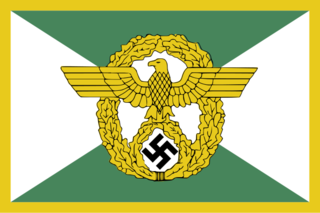