The Schutzstaffel, commonly known as The SS, was a "policy" enforcement Arm of The NSADP (Nazi). Organized from elements of The Party's "Brown Shirts", The SS were tasked by German Leader Adolf Hitler with overseeing all Polices regarding "racial" purity and other matters of Party protocols. Eventually tasked with law enforcement duties within Germany and it's Territories, The SS would eventually be given responsibility in the organization and operations of the dreaded Labor Camps (also known as Concentration and later, Extermination Camps). There were three different Branches of SS. The Allemeine (Admin), The Totenkopfuerbande (Labor Camps) and Waffen (Combat). Formed in 1925 (and lasting to the War's end in 1945), The SS were considered the ideal of Nazi perfection ( and most trusted by Hitler). Only the National Police Force known as "The Gestapo" held more power. The SS would also go on to form field combat troops, as The Waffen SS (Infantry, Commando and Panzer (Armor) Units). They were identified by twin, elongated White, "S" letters (worn on the collar or as an armband). The SS also maintained their own Branch colors. Their Flag was a Black Field in entirety. Centered in the middle of this, was twin large elongated "SS". This Flag flew from all Official SS buildings and all Waffen SS combat commands and units. Some varients may have also included a Skull and Crossbones (often referred to as "The Death's Head"). This additional insignia identifier wad worn by Concentration Camp operators and their commands. 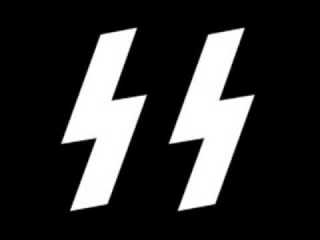