Seen in use by 1917, The CV Class of German Rumpler was a Fighter/Medium Bomber. Popular as a Reconnaissance flyer over The Western Front, The Rumpler was a two-seater Bi-plane capable of carrying up to 250 pounds of munitions. Rumpled also were used for limited chemical agent deployment (Chlorine and Mustard gas bomblets). The Rumpler had a problem with it's low cyclic rated engine and only had a maximum speed of 70 mph. None withstanding,  it featured a 19 foot body and a 25 foot wingspan. Operating at a 18,000 foot ceiling, they carried both The Spandau and Maxim 7.92mm machine guns. 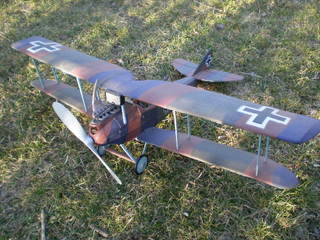