Known collectively by both German and Allied Forces as The "Fritz X", this weapon was the first precision guided rocket weapon first deployed in World War II. Devised in 1943 as an Anti-Ship Glide Bomb, The Fritz X weighed 3,000 pounds. It was 11-feet long and was 5-feet in diameter. Using a 700-pound Amatol Explosive Warhead (TNT and Ammonium Nitrate), it was capable of a 700 mph airspeed. The Fritz X had an operational ceiling of 13,000 feet and could travel 2.7 Nautical Miles. 1,400 were produced between 1943 to 1945. The device could penetrate 5-inches of Armor plate. Guidance was achieved by radio controlled sensors, which controlled the movement of the weapons stabilizer fins, which in turn guided the device to it's target.

Two methods were used in combat deployment in 1943. The first was the "Rocket" propelled Heinkel He 293 Fighter Plane. Mounted underneath it's fusilage, a Bombardier could "fly" The Fritz X into it's target. Another method was by launching the weapon from convention Bombers or Ships. Used effectively against Allied Forces in Sicily and Massina, Italy - against the abandoned Fascist Naval Fleet which was destroyed in the Harbor by Fritz X Rockets (to deprive their possible use by the Allies). In addition,  6 US Warships and several British Ships were damaged.

With an accuracy rate of slightly better than 50%, The German Luftwaffe and Kreigsmarine had high hopes for the deployment of the Fritz X. However, German resources were sorely pressed by 1944. Deployment was scheduled for the Coast of Normandy, France. Bad weather, lack of maintenance and an unknown Allied Invasion timetable, stopped their use during D-Day. Had they been properly deployed, a very different outcome to the Allied Invasion of France may have happened. 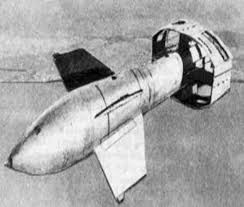