First developed in 1942 and tested in 1953, The ''Rochling'' Shell was a German World War II munition that was specifically designed to penetrate reinforced Enemy Bunkers and Fortifications. They were also part of Hitler's ''Secret Weapons'' Project (which included many of his ''Reprisal Devices''). The Railway Artillery launched shells were manufactured of Chrome-Vanadium steel and were stabilized via tube fins. The shells (which are often referred to as ''rockets''), ranged from 2 to 15-feet. The shell could penetrate 13-feet of reinforced concrete and could range up to 3,000-feet. This required very close deployment, which meant that they could be destroyed by Allied counter-attack. Another problem was their poor accuracy (no doubt linked to their lack of proper stabilization versus the length of the larger Rochling Shells.

The overall design of The Rochling was very similar to a Throwing Dart. The shell was tapered at it's front with nearly 80-pounds of High Explosive. Nonetheless, Rochling Shells (when used), were very effective. They were used against several Belgium and French Fortifications resulting in massive destruction. Only 6,000 Shells were known to be produced. Much of the refinement of The Rochling Shells, which could have improved their deployment was abandoned for Hitler need to develop other ''Secret Weapons''. 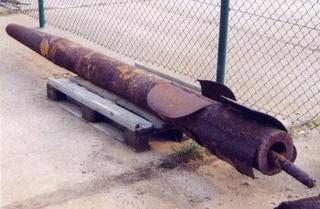