Named for The Rheinmaidens of Composer Richard Wagner's ''Ring'' Operas, The World War II German Surface to Air Missile known as The Rheintocher or R-1, was a rather long Project which – while worthy, was mismanaged by The German Research and Development section of Hitler's Third Reich. The Project began in 1942 and ended in 1945 with only (6) confirmed launches of the weapon. The Missile was 20-feet in length, with (12) wooden ''paddle-like'' fin extensions (each almost 3-feet in length). These were supposed to give a superior stabilization to the weapon in flight. Being wooden, they were also cost effective to make. The sustainer Motor (of which nothing is still known, as surviving examples are stripped prior to capture in 1945), allowed for flight guidance (which was radio controlled).

The warhead supported 300-pounds of high-explosive, gave an overall weight of over 1,700-pounds. A solid fueled propellant gave The R-1 a proposed speed ob 700-mph. It's range and altitude height is unknown. Envisioned as a Surface to Air Missile, plans were made to create an air-launched weapon from possible Jet Bombers (also in development). Of the (6) launches, it is not known if they were considered successful strikes (due to the V2 and related missile barrages still occurring). 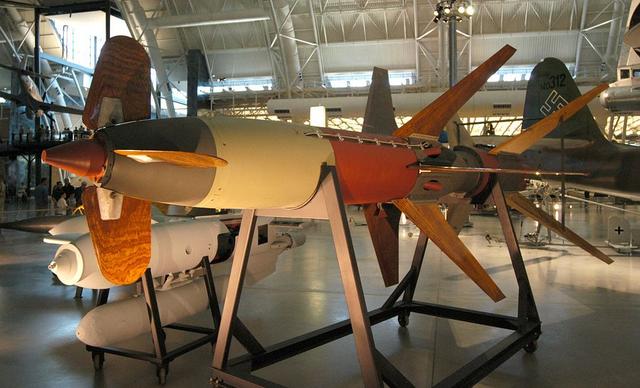