The "Boxer" Rebellion  (more precisely known as The Yihequan Revolt), was a short lived conflict which occurred in China, between 1899 and 1901. The causes of the Rebellion were varied, but it's principle aggression was aimed at major European Powers of The Era. After a disastrous series of Wars over Opium distribution, The "Great 8" (which was Britain, Germany, France, Austro-Hungary, The United States, Italy, Russia and Japan), established a Legation of diplomats, all with the goal of establishing Colonial control over China.

Bolstering the Chinese economy due to severe and long lasting droughts, The Powers also allowed for the establishment of Christianity  (via Missions), in a predominantly Buddhist Country. All these factors led to a split within the ruling Qing Dynasty. The anti-colonial faction (with support of The Imperial Chinese Army), joined forces with Peasant Farmers and Workers known as The Yihequan (translated to "Boxer" in English).

The Foreign Legation of 8 Nations were holed up in their Diplomatic Compound with a combined Force of 900 soldiers (against many thousands of Boxers). The Chinese Army did not directly engage The Legation (put they did arm and support The Boxers). The resulting Siege lasted 55-days. Finally, a combined Forces Contingent arrived to relieve the Forces.

One of the first to arrive was The Imperial German Forces of Germany. A special Flag was designed for their use. A Tricolor, horizontal Stripe design of Black, White and Red, a large Imperial Maltese Cross was centered in The Field. Behind The Cross, was a crossed pair of Martial Batons (symbols of Military power and authority). The Relief Forces Flag flew over The German Diplomatic Mission until all Government Staff were evacuated. The Flag was returned to Germany, and never flew again. 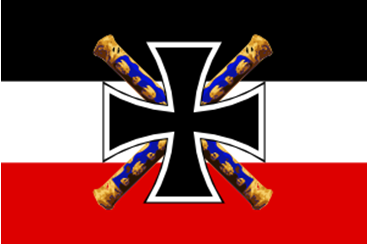