Designed by The German Ministry of Propaganda in 1941, The World War II device known as The Propagandawerfer 41 was a portable, non-lethal missile launcher. It was used to fire specially designed hollow canisters, timed to detonate at a predetermined height. Once achieved, they exploded to release paper leaflets. The leaflets contained Nazi Socialist literature. The tube measured 2-feet in length and was supported on a bar launcher which was easily assembled and locked the missile tube in place, much as a small squad mortar. Each ''shell'' was 1-foot in length and hollow. Inside was a dual compartment into which was placed propaganda printed on paper. When the projected altitude was achieved 400-feet, a timed charged of blackpowder detonated, breaking open the canister shell. The leaflets would thus fall to earth. Up to 200 such leaflets could be spread with each canister shell. Fired into Villages or Towns, the Propagansawerfer 41 saw service until the end of The War in 1945. 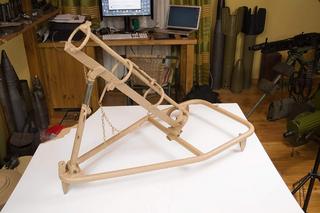